If you have multiple Internet sources, such as a Hotspot and a modem or two modems, then you will want to be able to manage those sources and direct traffic to them in a manner that suits you. This is known as Load Balancing. 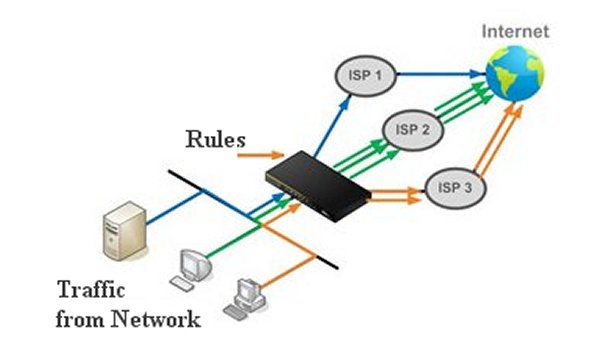 Load Balancing is the black box between your network and the Internet. It takes the traffic from the network, applies the Rules to it and then sends it to the Internet through the different sources. It is strictly about directing traffic and does not deal with Internet speeds or bandwidth. Because this deals with traffic on an IP basis rather than a packet, it should more correctly be called Connection Balancing.

Connection Balancing on the other hand does this by the IP Address of the traffic. All traffic from a single device going to a web site is sent there using a single Internet source. Traffic to another web site ( which has a different IP Address ) will be sent over a different Internet source. Instead of balancing traffic on a byte by byte basis it balances by connections to different IP Addresses. This means that the actual amount of traffic through each Internet source can be wildly different depending on how much bandwidth was used by each connection. In the long term the bandwidth will balance out but in the short term it may not be.

Connection Balancing is made up of four sections. These sections allow the balancing to go from hardware level to the rules used to direct the traffic. The sections are :

Rules are where the traffic from a connection to the Internet enters the Black Box of Connection Balancing. The Rules are checked one at a time until one is found that matches the specifics of the connection. A Rule can check the connection for up to six elements to try and make a match. These elements are

Using combinations of these elements means you can identify specific traffic that is travelling over your Network and direct it to a specific Internet source. This Internet source is defined by the Policy attached to the Rule.

Interfaces are the low level definition of each Internet source. Each source is defined by the Network Interface that provides the Internet and a method of determining if the connection is up or down.

From this you see we start by matching traffic to a Rule and then work our way down through the possible Internet sources until we reach the Network Interface that provides the Internet. Each Rule will have its own Policy which in turn has its own group of Members which use the defined Interfaces. This allows customizing the Connection Balancing to fit many different situations.

When attempting to do Connection Balancing it is important to plan out each step of the procedure in advance. This minimizes the chance of errors occurring.

Planning the Rule is the first step.

Do we want all traffic to the Internet to use this Rule or do we want only specific traffic? A Rule that implements failover from one Internet source to another would have all traffic use the Rule. Having traffic from the Smart TV use one particular Internet source would require specifying details about the TV in the Rule. Rules are checked in the list from top to bottom with the first Rule that matches being used. The more specific the Rule is the closer to the top of the list it should be.

In a Rule that requires all traffic to go through it like that used for failover you would set these elements.

To have just traffic from a specifc device using the TCP protocol go through this Rule set the elements like this.

It is also possible to match traffic going to a URL rather than an IP Address. This is useful for Rules that involve sites like YouTube or Netflix which have a lrage number of IP Addresses. Instead of using the Destination IP address in the Rule we use the IPset entry. See the DNSMasq-IPset page to learn how to create IPsets.

By mixing and matching the elements of a Rule you can make it as general or a specific as you want. Just remember to put the more specific Rules at the top of the list so the more general rules don't match to traffic and route them through the wrong Internet source.

The Rule we defined in the above step must have a Policy assigned to it to allow figuring out which Internet source to use. A Policy is just a list of Internet sources that have had a priority assigned to them and possibly a traffic ratio as well. In the case of our Smart TV we want it to use only a single Internet source so we would only have a single element in our list.

In our failover scenario we have multiple Internet sources so we need to assign them to the Policy.

By varying the number of Internet sources in a Policy we can fine tune where the traffic that matches the top level Rule will go.

Planning the Members comes next.

Members are an Internet source with a priority assigned to it. An Internet source can have multiple Members using it with different priorities. These would be used by different Policies to achieve different goals. In our Policy for the Smart TV we used a Member named Modem2. This uses a specific Internet source and would look like this. The metric and the weight are not used in this member since the Policy using it only has a single Member.

Using Members we can create groups of Internet sources are used in a specified priority. Each Policy can have it's own group of members to define how we want traffic to be routed.

Planning the Interfaces is last.

This is where we define each Internet source and assign it the Network Interface that is to be used by it. This is the lowest level of Connection Balancing. These Interfaces are predefined in ROOter and consist of the following.

Since Connection Balancing depends on knowing if the Internet source is connected there is a large section devoted to setting up the ping test used to determine this. This can be tailored to each Interface to ensure that the connection status is known.

In summary, we have a set of Rules that determine which traffic goes to which Internet source. These Rules have a list of Internet sources that apply to them, each with it's own usage priority. Every Rule can have a different list of the Internet sources with differing priorities.

While Connection Balancing can get very complex there are really just three scenarios that occur. These are

You can have multiple Rules so that you have a specific device using only one Internet source, traffic being split between two Internet sources and failover if one source goes down, all at the same time. It is just a matter of defining more Rules and ordering them correctly.

You must set up your dual modem system correctly using Custom Profiles and it is important that you specify which modem uses which interface using Modem Interface Selection. For the purposes of these examples we will assume that Modem 1 uses the WAN1 interface and that Modem 2 uses the WAN2 interface.

This Rule will specify the Smart TV by its IP Address so it will only apply to a device with that IP.

The Internet source used by the TV will be determined by the Policy named TV_Policy.

The Policy for the Smart TV Rule will define the group of Internet sources that may be used by the TV. In this example only one Internet source is wanted so there will be only a single Member in that group.

We are going to use the TV_Internet Member to supply Internet to this Policy.

The Member used by our Policy now specifies the exact Internet source we will be using.

Since we are assuming that Modem 2 will be assigned the wan2 interface in it's Custom Profile we are saying this Member will be using Modem 2 for it's Internet source.

Now we need to set up a Rule for all the other devices so they will use Modem 1 as their Internet source.

This Rule will apply to all traffic not covered by the SmartTV Rule.

This Rule will match to traffic from any IP Address so it will cover all the devices on the Network. It's Internet source is determined by the Policy named All_Policy.

The Policy for the All_Traffic Rule will define the group of Internet sources that may be used by the devices. In this example only one Internet source is wanted so there will be only a single Member in that group.

We are going to use the All_Internet Member to supply Internet to this Policy.

The Member used by our Policy now specifies the exact Internet source we will be using.

Since we are assuming that Modem 1 will be assigned the wan1 interface in it's Custom Profile we are saying this Member will be using Modem 1 for it's Internet source.

We now have two Rules that define how we want traffic on our Network to be routed to the Internet sources. Our Smart TV will use Modem 2 and the rest of the devices will use Modem 1. One last thing needs to be done to ensure the Rules act properly.

Another common scenario is using a modem to backup your wired or Hotspot Internet so it takes over if the primary source fails. Again we start with the Rule.

This Rule will apply to all traffic on our Network.

We are telling the Policy that we have two Internet sources that may be used and how they are used will be figured out in the Members section.

In the Members section we will assign our Internet sources an interface and the priority of each. This will determine how each Internet source is used.

The last example we will ook at is also a common use of Connection Balancing, splitting the Network traffic between two Internet sources. This can be an equal split or one soucre can handle more traffic that the other. We will start with the Rule once again.

This Rule will apply to all traffic on our Network.

We are telling the Policy that we have two Internet sources that may be used and how they are used will be figured out in the Members section.

In the Members section we will assign our Internet sources an interface and the priority of each. This will determine how each Internet source is used.

If the weights are equal then the traffic is split equally between the two Internet sources. If they are different then one source will handle more traffic than the other. Figuring the ratio is not really easy as a member with a lower weight handles more traffic than one with a higher weight. In this example the source with a weight of 1 will handle 66% of the traffic while the one with a weight of 2 will handle 33%. If the higher weight was 3 then the split would be 75% vs 25%. Remember that these are based on connections and not on byte count so one source may handle much more bandwidth than the other despite the ratio assigned.

These examples cover the most common scenarios when using Connection Balancing and can be expanded to more complex situations. More Rules can be added and more Members added to a Policy. It is possible to create a very complicated Connection balancing system that covers many different situations.